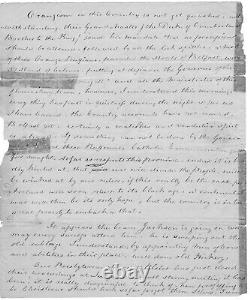 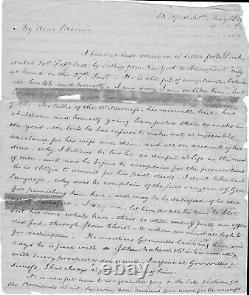 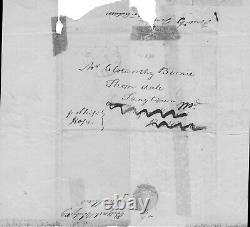 Catholic emancipation or Catholic Relief was a process in Great Britain and Ireland removing many restrictions on Roman Catholics and causing a stir among the so-called Orange Order, a Protestant fraternal order based primarily in Norther Ireland, who were committed to preserving the Protestant Ascendancy. The writer of the letters below provides some insight into the emancipation and the Orange order, calling the ruffians, as he writes to his friend back in America. He also speaks highly of Andrew Jackson, who. Had become President a few months earlier.

Offering a 2 pp, ALS 8 x 9 ¾, from John Shaw, Belfast. To his friend Clotworthy Birnie of Thomdale, Taneytown, MD, May 14, 1829 plus a 2 pp, AL, also to Birnie but incomplete and dated July 14, 1828. Birnie was a Belfast businessman who inherited land, called Runny Mede Enlarged, in Maryland from his Uncle, Dr. Birnie worked the farm with servants and slaves. Ned Swift, an old servant of yours, who is now in miserable condition with rupture and quite past his labor.

The woman whom honest Jack was married I understand latterly induced him to drink. His confinement to bed was not more than ten days when he expired. Orangism in this country is not quashed, notwithstanding their grand masters of the Duke of Cumberland, Brothers of the King, issued a mandate that no procession should be allowed, followed by all the lick spittles, a mob of these Orange Ruffians paraded the streets of Belfast with 37 stand of colors putting at defiance the governor.

And all the magistrates of this flourishing town. If something cannot be done by the governor [to] cool these ruffians, Catholic Emancipation good for naught so far as respects this province. Indeed it is broadly hinted at that ever will divide the people. If this really be the case, Ireland will soon return to its black age. A continental war will be its only hope, but the country is in too great poverty to embark in that.

It appears the brave [Andrew] Jackson is going on well, may every success attend him. He is sweeping out the old. I understand, by appointing men of honesty and abilities, well done Old Hickory. It is now time to congratulate you on the late election of the President's Chair, him owing how conscious you were for the success of the brave Jackson.

I hope from my heart he may fully justify all the expectations of his friends, while he fills his magisterial office. In this country, he had many well wishers, not, however without his enemies, which might be expected among a divided people. I now call upon you to rejoice with your virtuous countrymen on Catholic emancipation. It is at length established, not, however, without the greatest opposition on the part of that cursed faction, the Orange Men. The late wise measures of government will make us a happy and united people in spite of her enemies.

I would advise you to get some of the Belfast papers. Your faithful friend, John Shaw. Folds and fold repairs with archival tape throughout.

Cello tape stains, mostly on edges and affecting some words. Edge chipping affecting several words. Our goal is to please every customer.

We are pleased to be members of The Manuscript Society, Universal Autograph Collectors Club and The Ephemera Society. This item is in the category "Collectibles\Paper\Correspondence\Pre-1900". The seller is "bminnocci6mtm" and is located in this country: US.